The Urgency of Confronting Informality 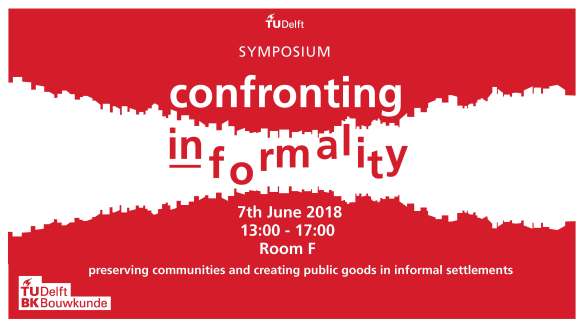 The Confronting Informality Symposium is highly significant for us today in Urbanism. It helps us reflect on one of the biggest challenges faced by humanity today: how to urbanise in a sustainable, inclusive and fair way?

While news outlets and academics repeat endlessly that humanity is now officially “urban”, having crossed the 50% rate of urbanisation threshold , few people seem to remember that the other 50% still lives in rural areas, often in deprivation.

That’s 3,7 billion people living in mostly underserviced rural environments. Not all of them yearn to go to the city. Many wish to preserve their traditional lifestyles, and rightly so. But many many of them will take the road to the city with their families in search of prosperity and opportunity, just like millions of people have done in the last few decades. This immense human exodus towards the city, much accelerated after World War 2, is not over yet.

Most of all, people are looking for the freedom and modern lifestyles that cities supposedly afford. Traditional rural lifestyles are precious, but if you are a single mother, gay, “low cast”, if you belong to the “wrong” race or religion, or if you are simply forward thinking, maybe a traditional rural lifestyle won’t agree with you. The city still offers the possibility of freedom, easier access to services, jobs and educational opportunities.

Of course, prosperity and freedom in the city are often elusive and the reality of the city might be much grimmer.

It may include violence, deprivation and serious environmental hazards. Most of all, it might mean squalid living conditions for the millions of migrants who get to cities every year in China, India, Nigeria, Indonesia and Bangladesh and in most developing countries of Africa and Southern Asia. Many people migrating to cities will end up living in self-built settlements or informal settlements. According to UN-Habitat, around 33% of the urban population in the developing world lived in informal settlements in 2012.

Governments in the Global South are often unable or unwilling to provide decent housing to all those migrants. As a consequence, rural migrants roll up their sleeves and help themselves.

Architects and urbanists in the industrialised world are fascinated by the inventiveness, the self-reliance, and the resilience of slum communities. For one thing, slums all over the world seem to be much more successful in creating communities than the sterile and grey modernist blocks that have dotted the landscapes of countries in the North: Holland, the US, the UK, France, not to mention the former socialist countries and many countries in the Global South as well. All have experimented with modernist formulas for rapid housing solutions, with more or less success. Let’s not forget that both Western and Eastern Europe largely solved their post-war housing crisis with such developments. But most people are quick to point out that modernist housing blocks are nowadays the backwater of most European and North American cities. So, slums don’t seem so bad after all.

But the image of hope and creativity of slums hides some deeper truths that must be confronted (This is not a pun. This is why this symposium is called “Confronting Informality”).

Slums in the Global South lack basic services and sanitation, and housing units are squalid, not efficiently ventilated or heated and downright unsafe. The lack of sanitation means that large swaths of humanity lack the most basic of all comforts: a toilette. As someone once observed, having water running out of your kitchen tap is a luxury beyond imagination for a large chunk of humanity. While the absolute majority of slum dwellers are honest, hard-working people, slums are often targeted by criminal gangs. The State is often absent and the rule of law is only selectively applied, mostly to reduce slum dwellers to subjection.

Citizens in slums are often in breach of the law, because they are almost always living on illegally invaded or acquired land. They are easy targets for violent drug cartels, greedy slum lords or corrupt politicians who will trade toilets for votes. This is absolutely not sustainable. Something must be done. Now.

TU Delft, as a leading technical university in one of the best-planned countries in the world has the duty to get involved in this debate. It must prepare its students to confront informality and to come up with sustainable, fair and innovative solutions that respect the livelihoods, hopes and wishes of slum dwellers.

While slums have many social and spatial features architects and urbanists wish to emulate, there are real challenges ahead. Discussing what is going on in practice is important for us to reflect on those challenges and fine-tune our attitudes and practices towards slums. We must strive to know more and to engage with actors on the ground. We must learn from local knowledge and we must bring the producers of new knowledge to the university.

This goes hand in hand with TU Delft’s ambition as a global university, learning and working together with local governments and other stakeholders to find local solutions for those challenges. Following the enactment of the New Urban Agenda in Quito in 2016, TU Delft has partnered up with UN-Habitat and the World Urban Campaign to promote a debate on education for the city we need. How to educate young planners and designers to implement the new Urban Agenda?

This has triggered the launching of the Delft Global Initiative, a platform for Science and Technology for Global Development at TU Delft. At the chair of Spatial Planning and Strategy led by Professor Vincent Nadin, a variety of initiatives, courses, weblogs, symposiums and conferences tackle issues of sustainable and fair spatial planning in the Global South.

The Confronting Informality Symposium, the Post-Conflict Symposium, the conference of Cities and Citizenship in Latin America, partnerships with China, Brazil, India and other countries, courses on Globalization, elements of the graduation programme, not to mention much joint research, all those initiatives aim to confront the challenges of sustainable and fair urbanisation in the next decades in a world where resources are increasingly scarcer, where the climate is changing and where democracy and governance in much of the world are threatened by conflict and bad governments.

Bigger challenges mean a bigger impetus for students and staff to conquer those challenges, while promoting justice and sustainability in urban development around the world.

This initiative addresses several of the UN Sustainable Development Goas, but focuses on the following: