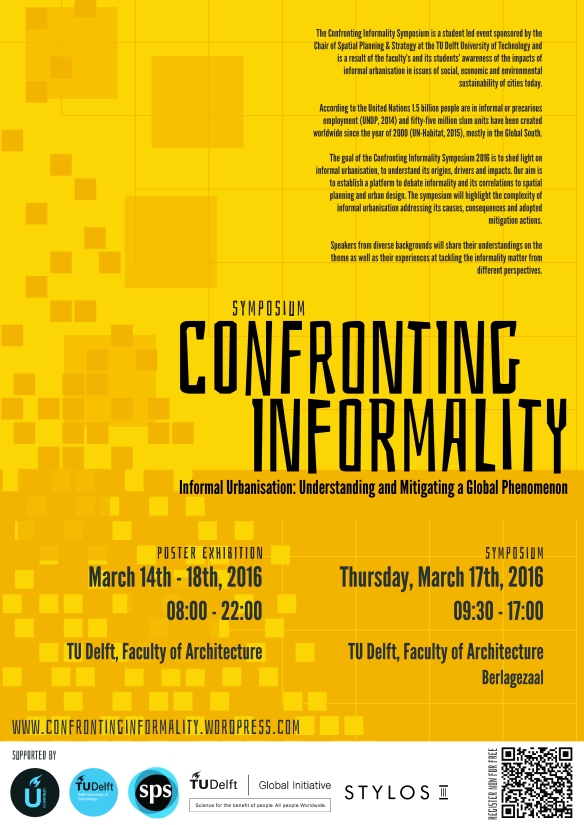 The 2016’s symposium entitled “Informal Urbanisation: Understanding and Mitigating a Global Phenomenon” will approach the subject of urban informality from two main cores: post-calamity environments and modernization and migration processes, with social dis-articulation and segregation as main perspectives.

What is the Confronting Informality Symposium?
The Confronting Informality Symposium is a student led event sponsored by the Chair of Spatial Planning & Strategy at the TU Delft University of Technology. The symposium, in its third edition in 2016, is a result of the faculty’s and its students’ awareness of the impacts of informal urbanization in issues of social, economic and environmental sustainability of cities today. We recognize the importance of understanding its drivers and its relationships with other issues such as poverty, gender discrimination, social segregation and economic inequality.

According to the United Nations 1.5 billion people are in informal or precarious employment (UNDP, 2014) and fifty-five million slum units have been created worldwide since the year of 2000 (UN-Habitat, 2015).

The goal of the Confronting Informality Symposium 2016 is to shed light on informal urbanization, to understand its origins, drivers and impacts. Our aim is to establish a platform to debate informality and its correlations to spatial planning and urban design as well as to comprehend its impacts and liabilities on political, economic and social issues. The symposium will highlight the complexity of informal urbanization, addressing its causes, consequences and adopted mitigation actions.

Speakers from diverse backgrounds will share their understandings on the theme as well as their experiences in tackling the informality matter with diverse perspectives.

Symposium Programme
The symposium will be a one-day event consisting of several presentations and debate sessions with the following details:

Along with the symposium, there will also be a poster and photo exhibition on the same theme to be held from Thursday, March 17th, 2016 until Friday, March 25th, 2016. The posters will be exhibited at the Berlagezaal during the symposium and in the Orange Hall of the Faculty of Architecture afterwards.

Planning to join our symposium as a participant? Register yourself here!
Are you interested in submitting a poster? Please follow this link.

This event is free of charge.

This site uses Akismet to reduce spam. Learn how your comment data is processed.